Back in September 2013, extremely high methane readings were recorded over the heights of Antarctica, as illustrated by the image below. 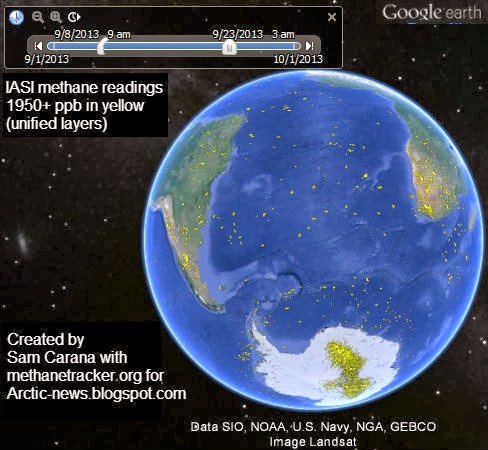 These high methane readings over Antarctica have not been discussed much among climate scientists, let alone in the media. Yet, large methane releases can contribute significantly to climate change, given methane's high potency as a greenhouse gas. Furthermore, the vast amounts of methane contained in the permafrost comes with the danger that, as global warming continues, such releases could increase in a non-linear way.

Noctilucent clouds could confirm that such emissions have indeed taken place from Antarctica. Methane will rise in the atmosphere, turning into water vapor as it rises up in the sky, and form ice crystals around meteor smoke at 83 kilometers altitude, showing up as noctilucent clouds.


It takes a while for methane to rise up to such altitudes, making it hard to pinpoint which methane releases are responsible for these noctilucent clouds. As methane rises, it tends to move closer to the equator, which is another reason to conclude that these noctilucent clouds are the result of large amounts of methane that have been released from the heights of Antarctica earlier in 2013.

As such high methane concentrations transform into water vapor and carbon dioxide, they may no longer register as methane on satellite measurements, yet they will continue to contribute to global warming. Therefore, large methane releases should be closely monitored, even if they do not appear to immediately translate into mean global methane level rises.

The question remains what caused such huge releases from the heights of Antarctica in the first place. The graph below may provide some of the answers. Look at the sharp temperature anomaly rise of 6 degrees Celsius over Antarctica in September 2013, preceded by a -3 anomaly. That's a difference of about 9 degrees Celsius. As temperature differences increase, there will be greater pressure changes, in line with compacting, expanding, tearing and other movements of the ice. Furthermore, more snowfall followed by more melting and vice versa will come with increased differences in weight. These two forces combined could be destabilizing the permafrost and the hydrates and free gas it contains. 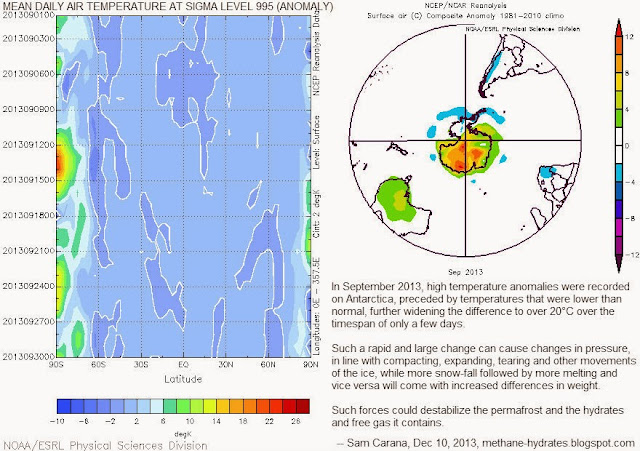 Temperature anomalies can be even more striking when looking at specific areas on specific days, such as on August 9th, 2013, as on the image below. 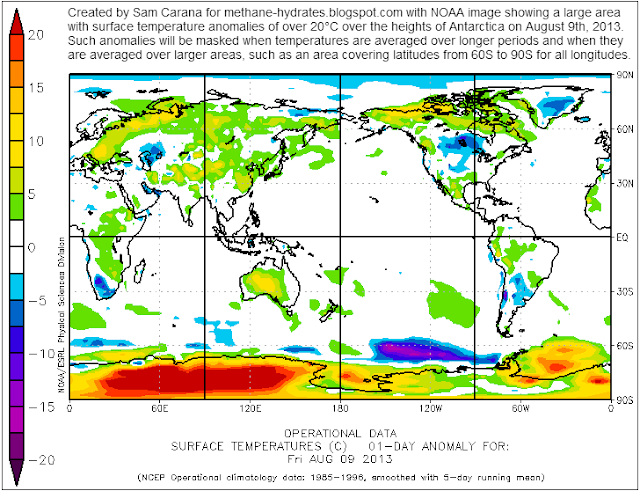 As said on the image, such anomalies (well over 20°C, in this case) can be masked when averaged out over longer periods and over a larger area, such as an area covering latitudes from 60S to 90S for all longitudes.

Recent research findings show that, as weight is lost due to melting, West Antarctica becomes more vulnerable to pressure from East Antarctica, which is pushing West Antarctic bedrock westward at rates up to about twelve millimeters—about half an inch—per year. This finding further confirms crustal motions that could destabilize methane hydrates contained in the permafrost.

The occurence of large temperature differences spells bad news, as they can trigger methane releases, the more so as wide and rapid temperature changes on Antarctica look set to become even more frequent and intense with further global warming.

- Noctilucent Clouds Get an Early Start