Earthquakes at such a depth can be felt at great distances from the epicenter. Across Siberia, tremors were felt and buildings trembled. In Moscow, some 4500 miles (7242 km) away, local law enforcement officers evacuated 850 people from two apartment buildings after residents said the buildings were shaking, reported the NYTimes.

The cluster of earthquakes and aftershocks (above image) is likely to have caused methane hydrates in the Sea of Okhotsk to become destabilized. Due to the long travel from the bottom of the sea to the sea surface, much of the methane may have been broken down by methane-eating bacteria without entering the atmosphere. Nonetheless, as indicated by the image below, large amounts of methane did reach the atmosphere in the vicinity of the location of these earthquakes.

The above image shows methane at ten altitudes close to sea level. Higher in the atmosphere, methane tends to center around the equator. The earthquakes in the Sea of Okhotsk are likely to have contributed to the above-mentioned peak readings. Due to the depth at which the earthquakes occurred, they caused tremors thousands of miles away and are therefore likely to have been caused additional destabilization of sediments elsewhere, especially along fault lines, with methane being released accordingly.

Particularly dangerous is the possibility that such a massive earthquake could trigger earthquakes further north, since a fault line connects the Sea of Okhotsk with the Laptev Sea, while a 5.4 magnitude earthquake (in blue on map above) did hit Siberia on this fault line earlier this year (on May 24, 2013).

Global methane levels have risen over the past few years and, without action, levels of methane in the atmosphere can be expected to continue to rise. There are some well-known sources of methane that are causing this increase, such as the growing number of vehicles around the world that are powered by fossil fuel and an increase in the number of coal-fired power plants in Asia. Lesser-known causes are emissions due to wildfires, fracking and a growing appetite for meat in developing countries. Some of the least-reported causes include increased methane levels in the atmosphere due to:
To get a better idea of the scale of the threat, a study published in 2010 points at pockmarks up to 11 km (6.8 mi) wide off the coast of New Zealand, in an area prone to earthquakes, indicating that large emissions from methane hydrates did occur in the past. The image below is from the April 2013 Press Release. 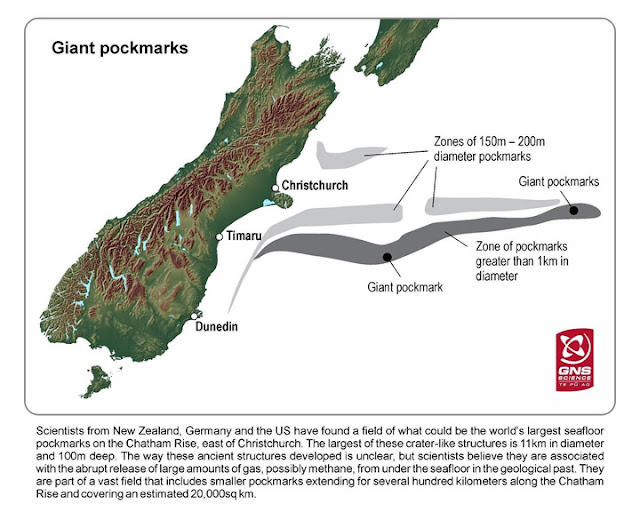 - Large areas of open ocean starved of oxygen
http://methane-hydrates.blogspot.com/2012/03/large-areas-of-open-ocean-starved-of.html
Posted by Sam Carana at 2:49 AM